No, sorry, don’t stop what you’re doing. By that, I meant the word that. Please, go on about your business; don’t mind me. 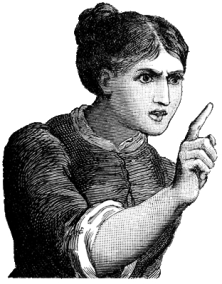 Well, okay, since you’re here, I’ll tell you: I hate that. It’s overused and distracting, a totally irksome term. People stick a that in everything. Why? It’s a word, not a mantra. And, here’s the totally irksome part, it’s unnecessary blather. We believe if that can logically follow a verb, it should, by God. Yeah? Think again.

You think this is just another tirade about grammar, don’t you? Ha, think again, smarty-pants. This is strictly a personal bias. That is one plug-ugly word, clattering and dissonant wherever it’s used. The stupid thing refuses to blend in. That, tha-a-a-t, that-that, sounds like honking. I don’t want to honk; who wants to honk?

We could consult the rules regarding the proper use of that: in restrictive clauses and subordinate clauses; when it’s the subject rather than the object of a clause. When which is more appropriate than that; when who is called for, instead. Blah, blah, blah, blah.

Grammarians make everything so complicated. I admire them for sticking to their guns in an ungracious world and all, but come on. Relative pronouns, subjunctive clauses? whoosh, right over my head. I go by instinct. If it sounds okay, that’s good enough for me. Oh, crap, there it is, the dreaded that. Pretty soon I’ll be tossing around gots instead of haves.

Anyway, the point is we can do without that most of the time. You don’t need to quit altogether, but try cutting back. Seriously, the world will be a better, more harmonious place.

That said, thank you for your cooperation.