: careful what you google :

I warned you. Now look. This is what happens when you google a perfectly innocent term like “human emoji.” You get these icky specimens — in your nightmares.

It’s kind of a good thing, actually. The images are part of an advertising campaign from French agency Rosapark for the child advocacy group Innocence en Danger. They’re meant to act as a warning to children and parents about the dangers that can lurk behind online conversations. The headline on each asks ‘Who’s really talking with your child on the Internet?’ The grotesque image suggests an all too possible answer. Horrifying? You bet. Effective? They stopped me cold.

A seed’s been planted in my imagination, folks — fertile ground for paranoia. For the next few days, anyway, the Internet will be teeming with creeps and weirdos and pervs where none exist: commenting on amazon, skulking around google, chiming in on grammar sites and Apple forums, searching wikipedia in dirty underwear. Everything dark and shadowy and vaguely menacing. 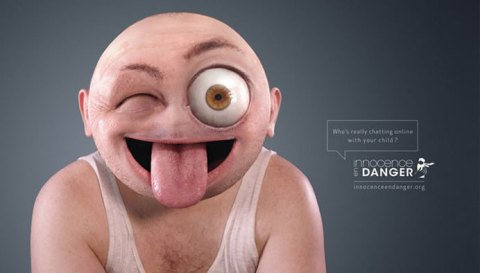 I don’t want this stuff in my head.

I want meadows and puppies and buttercups, wispy clouds and bright yellow sunshine, butterflies and birdsong and picnic baskets. Is that asking too much? Spring is right around the corner, daylight saving time is already here, so let’s focus on the glorious season lying ahead. We’ve waited years for winter to end, we should be out dancing in the streets. Alas, they’re still snow-packed and slippery, but not for long — sixties are forecast by mid-week. Hallelujah!

Now, run along outside where it’s safe and, please, whatever you do, don’t talk to strangers.