“Do something every day that scares you.”
— Eleanor Roosevelt

What kind of crazy, half-assed advice is that? Don’t encourage people, for chrissakes. Not now, not in the age of Jackass and America’s Funniest Videos. Mayhem and grievous bodily harm will surely follow. 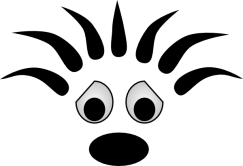 In this case, the author probably meant give a speech to the Kiwanis Club or ride a roller coaster, not Russian Roulette. Not mix aerosol products and open flame. Not toss a toaster in the tub. Yet there are many, oodles, who will fail to make the distinction. You could argue it’s an efficient way to thin the herd, but it’s mean and devilish.

Knuckleheads will take such forceful advice literally. So if you’re going to spout aphorisms, be clear about it. Leave no room for misinterpretation. Otherwise, expect bedlam. Misunderstandings will be the natural and ugly result. In fact, they’re the reason lemon-scented dishwashing liquid bears the stern warning: ‘Do Not Drink’. And frozen dinner instructions start with ‘Remove tray from package.’

Now, I’m not a scholar of First Ladies, but this advice seems out of character for the type. They’re a pretty colorless bunch. First Ladies are noted for fat ankles and selecting china patterns, not as advocates of self-destructive behavior. And, although she’s widely attributed as the author, evidence suggests Eleanor Roosevelt didn’t say any such thing. Similar, along the same lines, but not this exactly. Isn’t that a hoot?

Mary Schmich, a columnist for the Chicago Tribune, is the likelier source. In 1997, she wrote an article that began, ‘Inside every adult lurks a graduation speaker dying to get out.’  It continued on with a string of short, disjointed statements, such as ‘sing, don’t waste time on jealousy, floss,’ and included the line ‘do one thing every day that scares you.’ Baz Luhrmann, yes, the film director, transformed the essay into a spoken word song in 1999, crediting Schmich.