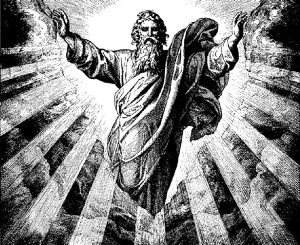 Why not candy, like a normal person? Or Coca-Cola or swearing or the Internet, something practical and a genuine sacrifice? I considered that route, but no. This year, I picked God.

The whole religion thing is a quandary. I go back and forth, round and round. One day, oh, there’s a God, all right, and He doesn’t think I’m funny at all. The next, nah, there’s no God. The day after that, God who? And on it goes.

I’m unable to reach a firm, lasting decision and I’ve no solid conviction either way. I’m not a believer. I’m not a non-believer. I’m not even a wait-and-seer. What I am, I suppose, is a ditherer. And I blame Santa Claus. Along with the Tooth Fairy, the Easter Bunny, Wonder Woman, Curious George, the whole bunch. They were all phonies.

Santa was simply the tip of the iceberg. When he was pantsed as a fraud and an impostor, he took the others down with him. They fell like dominoes — leaving me shattered and bereft at six. To this day, I have trust issues. Big ones. Paranoia is my constant companion. I don’t believe a word anyone says and I see ulterior motives everywhere.

God, if He exists, was an unintended, but inevitable victim. His very existence was brought into question as a direct result of those early delusions. Remember The Wizard of Oz? They finally, finally reach Emerald City and what happens? “Pay no attention to that man behind the curtain.”

Yeah, I’m not setting myself up for that again.

But what if I’m wrong, you know? I could be. Then what? If there’s a God, ipso facto there’s a Hell, too. And as much as I love a warm climate, Hell doesn’t sound appealing. Lakes of fire and pointy pitchforks are no substitutes for sandy beaches and rolling tides. There aren’t any upgrades, either. If you don’t like the accommodations, tough noogies; you can’t just pack up and move to a nicer place.

Even Einstein believed in God, just not one concerned with the fate and monkey business of individuals. Einstein found God in the intricate and glorious and deeply mysterious workings of the universe. A world of infinite wonder only a supreme being could create. As he said, ‘science without religion is lame, religion without science is blind.’

So see my predicament? Am I overthinking? I do that sometimes, but I’m more prone to underthinking. So, to be safe, I’m holding off on a final decision; let’s see how the Lent thing goes first. ¹

If I don’t get struck by lightning in the meantime.

¹ This is a reblog from 2015, so I’m pleased to announce things worked out all right. I’m still here and I gave up Chips Ahoy Thins this time. I don’t expect any trouble.