Believe it or not, that honor belongs to Neptune, one of the four ‘gas giant’ planets (Jupiter, Saturn, and Uranus being the other three). Gas giants are composed mostly of, you guessed it, gases, such as hydrogen and helium, with a soupçon of methane, and a relatively small rocky core. Sounds virtually indistinguishable from Congress, doesn’t it? Gassy, with a flinty little heart.

In 1989, Voyager 2 tracked an enormous hurricane-like storm called the Great Dark Spot in Neptune’s southern hemisphere. The storm system was the size of Earth. Wind speeds, which were measured in the 1,500 miles per hour range, are the strongest winds ever recorded on any planet in the solar system. 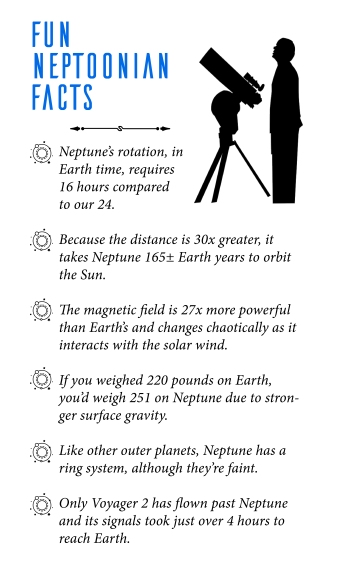 The unpleasantness doesn’t end there, though. Neptune is 2.8 billion miles from the sun, give or take, and has the shortest day in the solar system. It takes sunlight nearly 5 hours to get there. Yet, even at such a great distance from the sun, Neptune still experiences seasons similar to ours due to an axial tilt (28.3º) comparable to Earth’s (23.5º).

Triton, the largest of Neptune’s 13 known moons, is the coldest object in the solar system with a recorded surface temperature of -391ºF (-235º C).

Okay, why all the talk of wind and gases and harsh, bleak atmospheres? To remind you, amid all the acrimony and fingerpointing and contentiousness of American politics, there are worse places we could be. So cheer up and whistle a happy tune.

This page is to remind us there’s a world out there. A great big one, with lots of places we’ll never see and people we’ll never meet. The least we can do is pretend to be interested. Plus, seeing weather conditions in curious, ever-changing places offers a glimpse of life beyond the Internet and Facebook and all the rest. There is such a thing, you know. Life beyond the Internet.

Define best invention ever.October 16, 2022
What would we be without Noah Webster and his love of the English language? Speechless, that's what. Webster created what is widely considered to be the first dictionary in America and today is the day we celebrate his birthday. Let's pernoctate and frivol, but not to the point of being pestiferous!