Yes, it is. It’s a very big deal. The distressing moments are when real life occurs. Senses heighten, we become alert and watchful and horribly, painfully self-conscious. We’re left to rely on rusty, decayed social skills to dig our way out of whatever quagmire we wandered into. It’s nerve-wracking.

Even something as mundane as an elevator ride can lead to trouble, make us squirm and fidget to beat the band. Living on the eleventh floor, I know this to be true. The curious part is, the more crowded the compartment, the happier the passengers. But when it’s just you and a stranger, things can get weird — depending on the stranger. Not you.

For instance, I stepped into a vacant elevator on eleven and headed to the first floor. It stopped, of course, on nine where a woman got on. Now, typically, you do one of two things: watch the floor numbers light up or stare at your shoes. I chose the floor numbers. The other woman stared at my shoes, not hers. And a peculiar conversation broke out.

She jerked back and hit me with a glare. What, wrong answer? It was the truth — to a personal question straight out of nowhere. Seriously, who asks a stranger their shoe size? Did she need proof? Should I take off a shoe, show her?

A little rattled, I went back to watching the numbers light up and she watched me with the intensity of a laser. Dang, I was being flash-fried. When the doors finally opened I wanted to bolt, but I politely said, ‘after you.’ She squinted a silent, hostile accusation and marched forth with an indignant nose in the air.

Stairs, now they’re invigorating. And no one ever uses them. 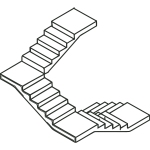